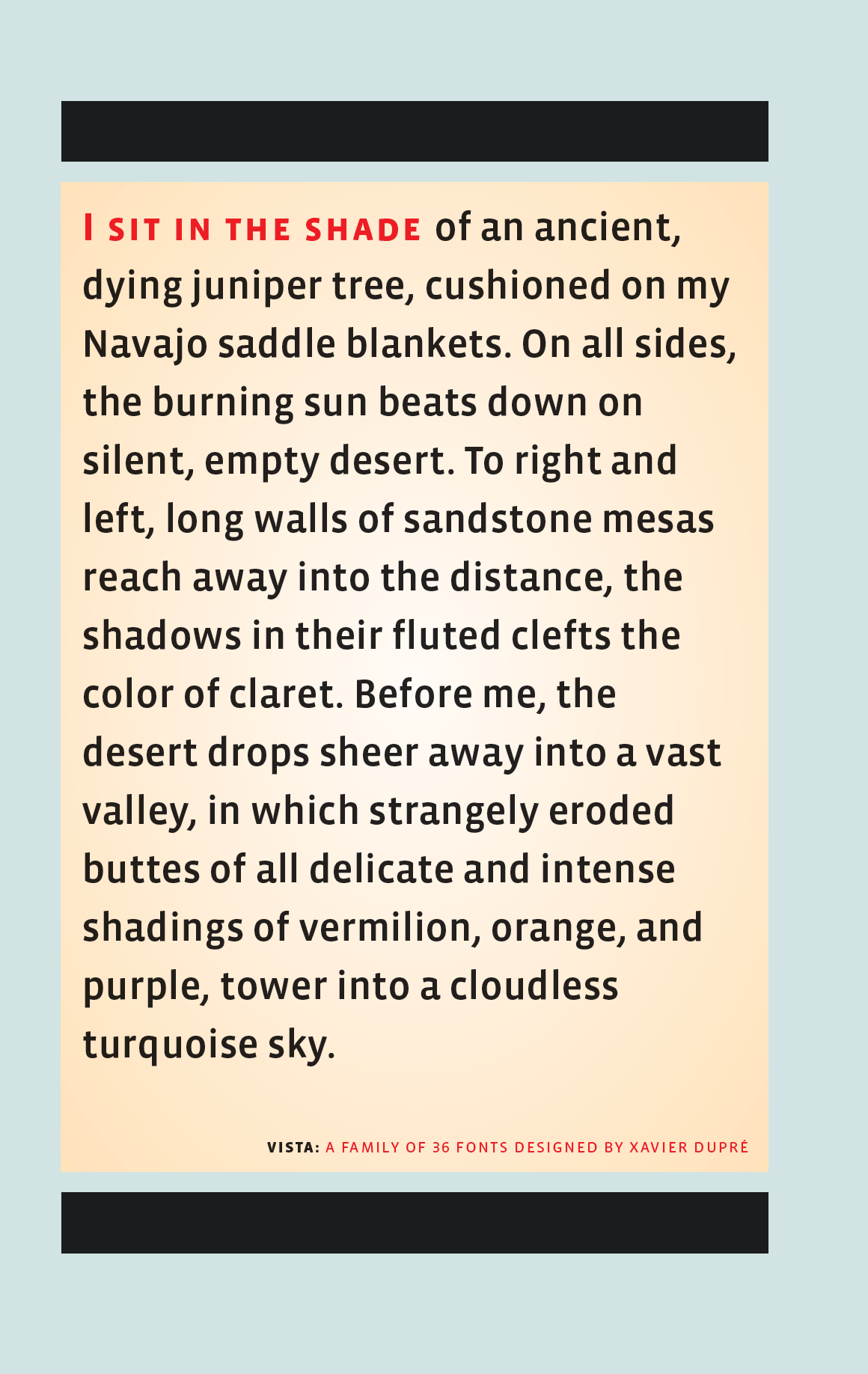 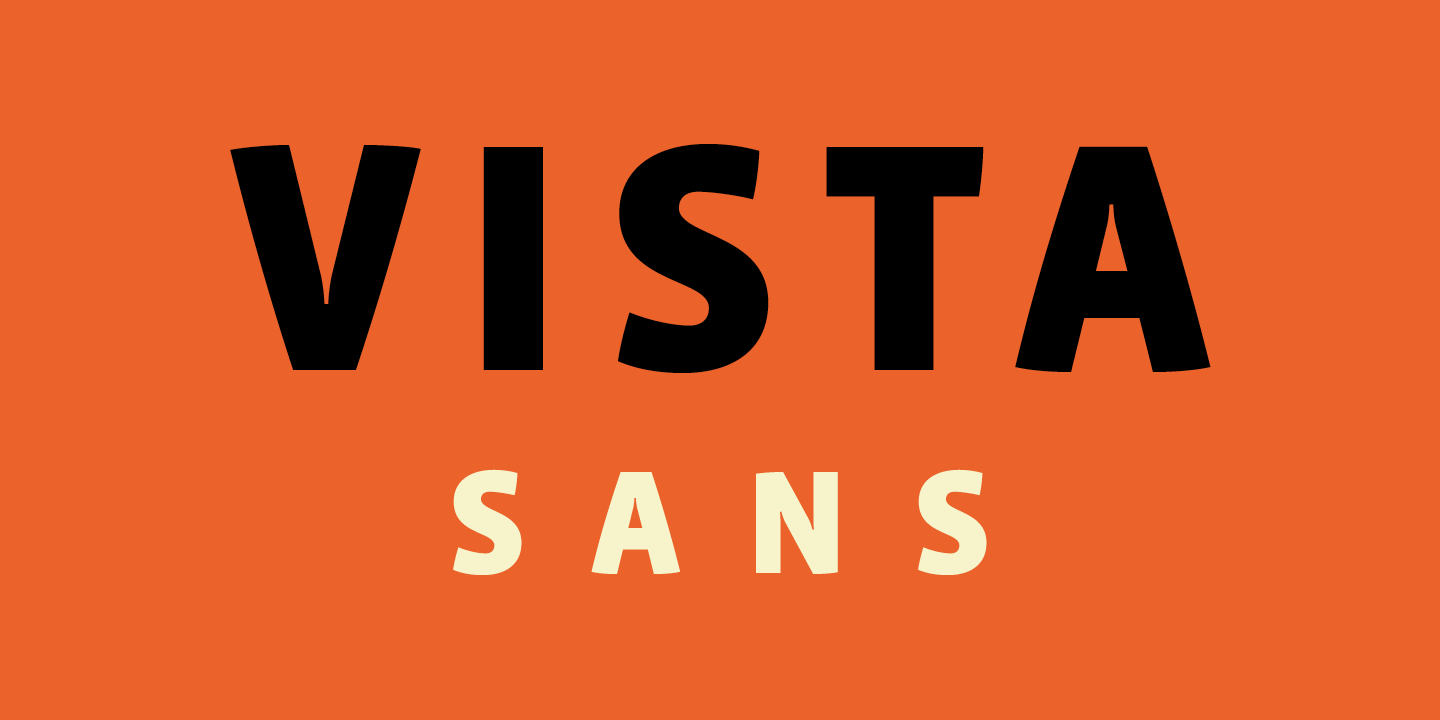 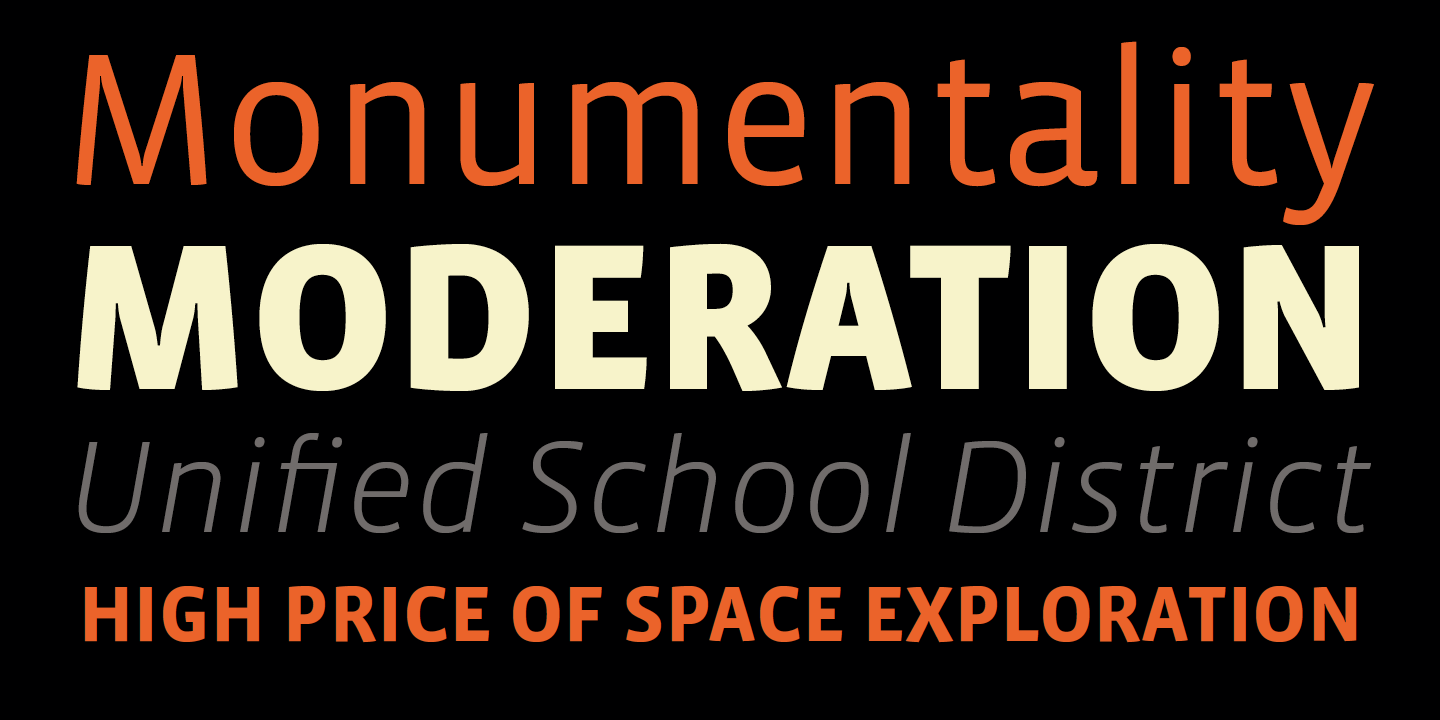 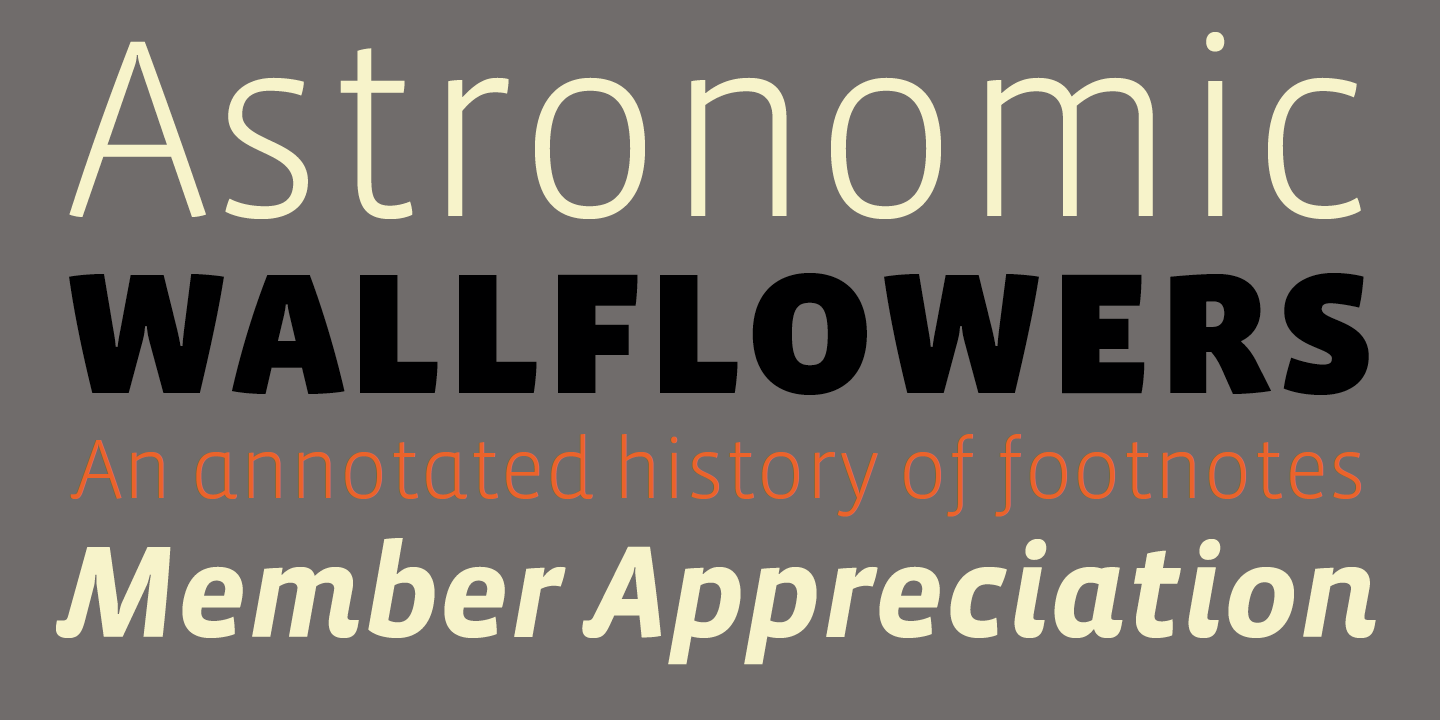 The concept for Vista began in July of 2002, when Dupré sketched a few characters in a notebook while staying in Sumatra on holiday. Most of the shop signs in Sumatra that caught his eye featured wildly idiosyncratic hand lettering, often with extreme slab- and triangular serifs (probably inspired by Western Americana), and other unusual shapes.

In reaction to this, Dupré set out to design a semi-serif typeface that would retain some of these animated characteristics, while being useful enough for more general text applications. He was inspired by Erik Spiekerman’s FF Meta, which succeeds at combining the humanist appeal of calligraphic forms with the pragmatic simplicity of the sans.

After a number of false starts, in May of 2004, Dupré arrived at the right proportions for a text font that was not too condensed to preserve comfort in reading, and not too wide for economy of space. The text weights are loosely spaced while the bold and black are spaced more tightly. This type of spacing emphasizes the lightness and blackness of the respective weights. It also makes the lighter weights more legible when setting long texts at small sizes, while the Black weight, which is more appropriate for titling, is given more impact with the tighter spacing.

The a, always a favorite of Dupré, became the most characteristic letter, setting the tone for the typeface. Dupré considers it the soul of Vista. Together with the lower case g they are the most difficult characters to design. While drawing these early forms he was also inspired by blackletter types, particularly their contrast, emphasis on the vertical, and strong graphic look and feel. He combined these features with more humanist shapes to make a well-working text font. The form and the rhythm of Vista are a blend of blackletter and humanist writing.

There are many subtle details in Vista that become interesting at large sizes. For example, the elegant, slightly bulging edge on some of the stroke endings. When he was studying type design at Scriptorium de Toulouse, Dupré drew type calligraphically by hand on tracing paper without a ruler. As a result, his type designs were always very curvy and smooth, perhaps too much so, but it’s something he enjoyed. It’s not easy to add subtle curves to a sans design because without serifs there are fewer areas where one can introduce curved details. So with Vista he experimented with adding the curves in slightly unusual places such as some of the stroke endings.

Other details include ink traps in some characters (x, v, w...) and squarely notched inside cusps in other characters (b, n, r...). Both of these treatments, while seemingly different approaches, add a square appearance to otherwise pointed areas, and unifies the characters.

When he finished the design of the regular weights, he found them lacking in what had first inspired him: the hand-lettered shop signs in Sumatra. So alternate forms were added to provide subtle variety for titling usage. To prevent over-usage of the alternates, which can easily result in unappealing typography, especially in the hands of a novice designer, only a select number of characters have alternate forms. Unlike traditional swash caps, the Vista alternates can easily be used for whole words or short sentences, striking a healthy balance between functionality and expressiveness.

Each of the six weights include alternate, small cap and italic variants for a total of 36 fonts in the family. They are available in a full volume of 36 fonts, or in four packages. The packages are grouped into two sets of contrasting weights, with the alternates and small caps divided into separate packages.